MFL Resources for the classroom

People of a certain age (alas this includes me) are always impressed by the technology in today’s classrooms, especially the ubiquitous interactive white board. The nearest I came to hi-tech teacher resources in my day was an overhead projector! Are they used anymore?

As impressed as I am, I know a large group of important people who are not impressed……children. White boards are all they have ever known and when I asked my daughter (15) about it – she quite rightly pointed out that her phone probably has just as much technology in it – maybe more. For today’s generation, technology  is the norm and seems in no way extraordinary.  Short of turning a classroom into a 3-D, Avatar experience, it is hard to see what classroom resources will impress them.

If the answer is not hi-tech – then what? Actually the answer is perhaps surprising. Low Tech! And in this blog I am talking specifically talking about the humble board game. Nothing can get lower tech and yet I received this email last month from a French teacher at Worth School……

“It would be great to find more decks of cards as my Y10 are getting crazy about it. My Y8 (who never played) discovered the game this Thursday. Not surprisingly they enjoyed it but   most of all they had 20-min of laughter….. Thank you, Kloo.”

Board Games are an important language resource 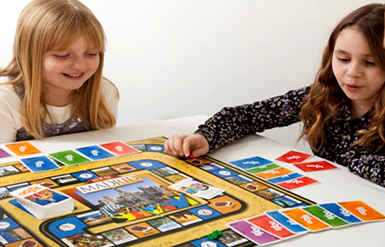 The fact is we all love games. We love competing and when we do all our senses become heightened. It means we feel more alive and yes, if the game is built around learning, we learn faster too.

We cannot replace the white board with games – but we can let games bring another dimension into the classroom: change the scene, re -energize students and make language fun. Teachers who have adopted KLOO MFL games have noticed a vast difference. Children come alive and animated and learn fast too. Who would think that in today’s world of technological wonders the game that is proving to be a great French and Spanish teacher resource and driving students crazy to learn a language isn’t an Xbox or Nintendo – but a board game….KLOO la la!

How to make a French sentence in seconds

ToyTalk Reviewers’ comments: “Our children quickly started to pick up some French language skills when playing the game… Although the educational elements are obviously strong, this still feels like a game and the kids were happy to play it… The production values are very high, the game is a pleasure to play.”

Players find they learn a language at least 200% faster and have more fun too! The game was designed around important language learning principles. Why not for instance check out how easy it is to make a sentence in Spanish using KLOO cards in the video below: