Does too much ICT silence our foreign language voice? 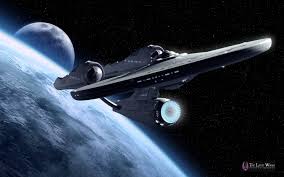 When I walk into my daughters classroom it’s like the bridge on the Starship Enterprise. Screens all around, laptops, interactive white board. “Our co-ordinates please, Mr Zulu?”

And language learning has adopted ICT, bringing many marvelous programs to students. Point at this word and you hear the pronunciation. Multiple choice – instantly marked. Spellings corrected – as you write. You can even just ask your computer to translate from virtually any language – to any language.

At home we have some expensive language software and Muzzy and audio CDs. We have the internet of course. There are great little apps you can play with on your smartphone….you can listen to foreign TV and radio too.

And yet … and yet – I think there may be too much. Too much what? Well screens, mice, images, virtual stuff.

Language is the art of communication with another human being.

Language is communication – being understood by and understanding another human. Call me old fashioned – but we benefit more when we practice language speaking with each other – rather than clicking a mouse or speaking to a computer and watching waves tell us if we pronounce correctly. There is plenty of research to corroborate that interaction with people is the best way to learn a language. What is more, the other person we are interacting doesn’t have to be fluent – just someone willing to learn too.

Linguistics Professors Kendall King and Alison Mackey of Georgetown University state in their excellent book The Bilingual Edge (Collins Living) that for language learning to be effective it:“must be with a real human being, and not a DVD, television program, computer game or talking toy. These edutainment devices, while extremely well marketed and popular, cannot substitute for a real human being and real interaction”

I urge you to read the book – it a revelation and not at all based on conjecture – but on solid research. They say that CDs, DVDs, software programs, educational toys make promises “that end in disappointment – in part because these products and programs are unfortunately not based on what science tells us about how children actually learn languages.”

Of course technology has its place – but I wonder if it should be the back up to human interaction rather than the default. Interestingly, children often adore real language games with human interaction. Our  foreign language game KLOO rewards children for making sentences and learning words. They can race to Paris or Madrid and the longer their sentences and the more French or Spanish words they learn en route – the faster they get there. The reaction of children, reported by teachers, is astounding. They report fast learning, renewed enthusiasm and fun. It seems that the kids want to break away from screens too.

The value of the humble board and card game 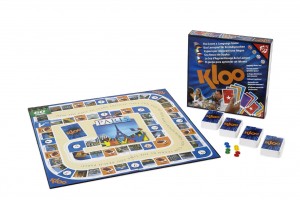 Class can’t be all hands on fun and games – but many teachers are reporting that the IT pendulum is jammed to the ICT end of the spectrum and when they bring it back to the middle – mixing ICT with games and human interaction – wonderful things happen.

I have no idea how much can be spent on IT for language learning. Many thousands of pounds I imagine. Our humble card and board game has won 6 major awards including the ToyTalk Best Board and Card Game 2011 and Runners Up as Language Product of the Year (to an on-line computer software program!).

Worth breaking open a pack of cards I think. Hands up if you can make a sentence 7 cards long and win 7 points?